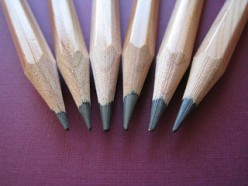 Whether used in the office, to draw your next masterpiece, or a little bit of both (doodling in the office), it’s important to understand the differences between the various types of pencils. You may notice (especially in the art department) several different pencils marked with a combination of numbers and letters, for example, 2B, 3H, HB, etc. In office supplies, you probably recognize pencils by the number, like the common #2 pencil. If pencils all do the same thing, why are two different systems used to identify them? What do the letters/numbers actually mean? Bet you have more questions about pencils than you thought. This blog post will hopefully answer all of the questions you may have relating to pencils including why #2 pencils are yellow.

Pencils that use the numeric system come in #1, #2, #2 ½, #3 and #4. The higher the number on the pencil, the harder the core will be, producing a lighter mark on the paper.  A #1 pencil has a softer core resulting in a darker mark. Since softer lead pencils deposit more graphite on the paper, they require more sharpening than a hard pencil. Being the middle of the road, the #2 pencil is the most common. You probably remember needing one of these for Scantron tests. This is because anything harder than a #2 pencil was too light for the machine to read and the #1 pencils often smudged.

When it comes down to it, choosing the hardness of lead is left up to personal preference. Some like a darker line while others like a delicate, light line. If you are still unsure, a #2 or HB pencil should work fine for your needs in the office. For drawing and sketching, it’s a good idea to have a range of pencils with different hardness levels. You want to have at least one soft and one hard pencil along with an HB. Have further questions about pencils? We are always happy to help! Stop in, give us a call (941-747-2995) or leave a comment in the box below.

Fun fact: When we mentioned #2 pencils earlier in this blog, what image came to mind? We bet it was ordinary yellow wood case pencils like the ones pictured below. The yellow #2 pencils are so iconic that it makes you wonder, why yellow? We may not see them as luxurious now but back in 1890 when the tradition of yellow pencils came about, they were intended to be the best and most expensive pencils around. The L and C Hardtmuth Company in Austria-Hungary introduced the first yellow pencil as Koh-I-Noor, which is named after the diamond. At the time, most pencils were painted dark colors or not at all which really made these yellow pencils stand out. 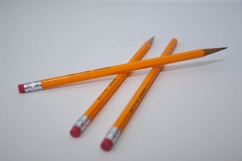 This isn’t the only interesting fact about yellow #2 pencils. To find out more, follow us on Twitter and look for Professor Printston!

4 thoughts on “What is the Difference Between H and B Pencils?”